Parenting when you know nothing

Even when you know it is coming, you are never prepared for that moment when your children look at you as if you clearly “don’t know anything.” After all these years of being the one they run to when they are hurt, the one they find comfort in when they feel lost, the one they trust to fix it when things get broken, the one they turn to for advice and wise counsel.  They are special times and I say to anyone with young children ... DON'T WISH IT AWAY. Boy, they seem like easy times now!

I feel like I am at the stage of parenting where my thoughts really don't count for much, until they need money.  A humbling place indeed! I thought I was tougher. I truly have been heart broken when they look at me as if I come from “mars” and “dis” me without a second thought. 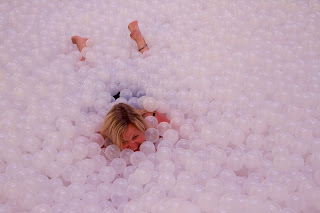 My biggest challenge is to be quiet and listen and especially to know, when I do decide to speak, what to say. Lately, I feel I am getting it wrong more than right, I feel like I am drowning in a sea of "Speech" bubbles, which confirms that I clearly “don't know anything at all.” Mostly, I am learning to pray a lot, listen more and trust that the foundation we have planted in them is enough. This is not the time to begin developing a relationship. This is the time to have a lot of credit in the LOVE bank to get you through this stage. I am praying I have enough credit to get through.

I implore anyone with young kids to make sure you fill the bank of LOVE and TIME and RELATIONSHIP and CONSISTENCY to overflowing when they are young. It will be necessary when they hit their teens and young adult years.

These are the times when you really need a VILLAGE you can trust. I am thankful that we have been able to surround ourselves with great people who can be that voice that I no longer can be in this stage of my kids’ lives. I implore anyone with primary age kids, make sure you intentionally plant other voices in your kids’ lives, people you know you are going to be happy with, so when you hit this stage, you can sleep at night knowing that what you can’t say, they can.

These are the times when the VILLAGE must understand what “partnership" is and being for you and with you as parents and not against you. I know I have been guilty of listening to kids and wondering what their parents are doing? Now I realise that it is not always fair to just hear the teens’ perspective and not the parents.  When you do life truly together, you see it from all sides and are able to be a support to each other as parents as well as the voice of reason for each other’s kids.

These are the times when you need your own VILLAGE so you can say to a friend or one older and wiser, “do you believe they said this?” and you instantaneously get that look from them that validates all you are feeling, and that says “OMG, I know how you feel!” You need others to keep you propped up, those who are further down the track, who smile at you in a way that says, “this too shall pass.”

Your children are always your children, no matter what age they are. You love them and you ache for them and long for them to be happy. When you get to the young adult stage and you are told you clearly “know nothing”, the rules of the game change, so beware and be ready and don't do it alone.

I am beginning to understand why Paul said, “Parents don't exasperate your children” (Col 3:21, Eph 6:4) It is becoming a harder and harder command for me to achieve. Lord, help me to keep quiet, pray harder and speak less, be patient, and trust that nothing we have said in the past was wasted, even if it might take a long time for me to “know anything” again.
Posted by Tammy Tolman at 16:58 No comments:

Today (30th June, 2017)… not unlike any other day the world turns. The news tells of pain, sorrow, hate and war. A world truly lost if we want to listen. I hear a quote on the radio:

“Seek first to understand, then to be understood” - Steven Covey.

Is it possible to understand the news of today?
Cardinal George Pell (high ranking Catholic in the Vatican) is charged with sex offences.
Germany makes same-sex marriage legal.
Trump bans people from 6 Muslim countries from entering USA.
People are being killed in India because they were found carrying beef, as the cow is more scared than a person’s life.
The Gulf crisis grows as Qatar is cut off by many countries and no-one seems to be able to understand each other.
More than 10,000 people were rescued last week from rickety boats that set off from Libya. At least 60 have drowned.
This year marks 16 years of unrelenting war in Afghanistan between the US backed government and the Taliban. Will Afghanistan ever find peace?
A little closer to home today for me: A funeral for a 19 year old who was decapitated violently as a passenger while driving with his mate at 150km in a 60 zone. 1200 people weep over the loss of someone so young and vital at the Tops Conference Centre. How do we understand this loss? We drop off a car to a sweet girl who turns 16 tomorrow, and lost her dad 3 weeks ago. As she gets her dad’s car on her birthday, it is hard to understand the mixed emotions she will feel tomorrow. We meet with a corrupt Government system which has taken take 2 children from their mother, and pitted the family against each other. No-one one is listening to each other. We must sit and listen to the twisted lies that are made to serve an injustice for this family. We seek to understand but feel helpless. All this as I prepare for camp next week where we serve and love 37 children from abuse and dysfunctional families. Children who desperately need to be understood.

And that was today, June 30th, 2017. It is a heavy day, not unlike many other days lately if you seek to “understand” what is going on in the world and in our own worlds.

Is anyone really seeking to understand? It seems that mostly people want to speak and be understood, without ever really listening to anyone else. It seems that the right to speak and have the freedom to your own opinions and beliefs is the ONLY thing that matters. It’s a “radical individualism” that surges through society all over the world, from the top down, and I wonder where it will stop?

In some ways it has always been there, since the Garden of Eden. It is the flaw of humanity. I just wonder if God cries, wondering if humanity will ever get it? It doesn't work! And yet I feel we are becoming more and more vitriolic about our right to “radical Individualism” as each day goes by.

In this time and always, God seeks to bring peace, self-sacrificing love, hope. He longs for us all to seek understanding, His understanding, which sees the world and the way we are to live in such an opposite way to the way we live today. As the last words God speaks in the Old Testament and the first words of the New testament attest …God longs to see the “hearts of the parents turn to their children and the hearts of the children to their parents” (Mal 4:6 / Luke 1:17). To turn our hearts toward each other is to try to understand before we demand to be understood. It is an  other-centred approach, a heart turned towards the good of others, rather than what I can get for myself. Imagine a world where we lived in this way!  Surely it would make the news of today better.

Lord, I want to live my life in a way that “seeks first to understand, then to be understood.” I believe that your truth is the best place to start. Help me seek to understand that first and then seek to take the time to understand others that I may be able to bring hope, love and peace to a hurting world.
Posted by Tammy Tolman at 15:46 No comments: