How do we navigate the storms of Life?

A storm hit the south coast recently and the TV and radio told everyone to “stay in doors, take cover, don't go out in it”, basically to stay safe. All good and wise advice and I completely understand why they wanted as many people to stay off the roads. It was sad to see the damage to people's homes and businesses.

The photographer in me wanted to go to our local harbour and watch the ocean,  to see first hand what this storm was doing to our break waters. I was surprised how many other people had the same idea. There was a traffic jam to get anywhere near the harbor and there were people everywhere, rugged up and excited; to face the storm “head on” and experience its power. In fact I was coming back from a ministry event, so I had on my best dress and  shoes, not worrying I just threw on a rain coat  over the top not concerned if I got wet; I just wanted to capture it all on camera.

So here we are wet, cold, wind blown, standing on the edge of the break-wall watching this amazing storm stir the sea into a frenzy, waves smashing into the lighthouse and breakwater with amazing power. We waited and waited, almost praying for it to get bigger and bigger, we wanted to see the force of the natural storm as strong as it could be. I later heard that the force of the waves actually crumbled a stone wall near where we were previously standing. 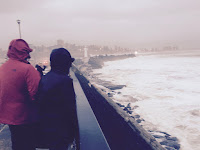 I watched from a distance young people standing right near the crash zone in order to let the massive waves crash over the break water and all over them. I was thinking how some people really love the thrill of being in the middle of that power and experiencing it first hand, even if it meant putting their life in danger. It was if they were saying to the storm "bring it on, you may knock me down but I will get back up again”. There was a part of me that wanted to go down there, but I was in my good clothes. I further thought wait I am 48 now - I really should be more responsible....so I just took pictures  instead. I found out later than one of the young people I observed was my son, which I must say had crossed my mind at the time that he might be one of those crazy kids as I watched from afar.

From a safe distance, it was thrilling to watch natures show; the sheer power of the waves, the turbulence of the rolling sea, the crashing of the waves into the break-wall and even the boats being tossed around. To see what is normally a sleepy, force. I could not capture it adequately on a camera due to the sheer size of the waves and force of the wind.  It was however so amazing to watch. I decided that I had to put down the camera and watch. Wave after wave - a never ending display of power battering the coast. 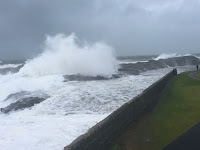 I could have stayed there for hours; it intrigued and mesmerised me. I wanted to keep watching, to get more intense, watch the waves pulverise the small harbour and display more and more of it's sheer force and power. I found it invigorating!

Later at home, settled in for the night safe and secure watching the news and hearing reports of the destruction that the storm had left in it's wake, I felt a little guilty that I simply saw it as a source of entertainment earlier that day.

I asked my self "Why was I so keen to watch the storm - to find it so thrilling? I knew that if everything I owned was destroyed I would have had a different attitude?” . A bigger question “I wonder why I can enjoy the storm as a spectator, but when life throws me a storm, even a small one, I am the first one to ask why this is happening – even the first to ask where is God - even why is God allowing this happen?"

What should our response be when the storms of life hit?  Should we go out like my son and face it head on? To shout the to storm -  “Give me your best shot, knock me over and watch me get back up again” OR “Why is this happening”?

Can we look at the storm and see His power and control? Perhaps even the lack of our control and be in awe of God OR to see it as God punishing us and not loving us?  Can we face storm together? I had noticed in the harbour at the time that all the boats were tied to each other as they attempted to weather the storm. The fishermen know that together there is strength far greater than doing it alone.  What is our response when there’s a storm in life? Do we retreat, run, hide, give up and let it defeat us - taking the storm personally even at times seeing it as Gods judgment upon us?

When you are in middle of the storm, being tossed and thrown about, it is not easy to see it any other way other than to survive. We certainly don't often sleep like Jesus did out in the storm. However as  Jesus did, we can call out and ask the storm to be still. He CAN calm the storms if He wants to. Unfortunately sometimes when He doesn't it is hard for us to find the His peace and  drawing upon His power discover His perspective, seeking the strength He promises to endure it. Sometimes we simply need to weather the storms that life WILL throw at us knowing that whatever doesn't kill you makes you stronger - this is not easy to do.

To choose NOT to be bitter, defeated -  not to run or give up. Although there are many times I feel like this, it is just not an option for me. My prayer is that I get better at it as I walk with Him each day - that one day I can actually stand looking into the face of a storm and call out with unwavering resolution and confidence "Bring it on, you may knock me down, but I will get back up again.”
Posted by Tammy Tolman at 19:06 No comments:

What does it mean to do life together?

It is always a privilege to lead a faith community in an intergenerational worship experience. Last Sunday was one of those mornings. Sunday mornings are always a challenge to fit this into the time slot of 9:30am - 11:00 am. It was a very wet morning, we expected that many would just stay at home. To be honest if it was me, I would be very tempted to do so, especially when the radio and TV was telling everyone to stay home. But the room was full of people of all ages and it was a wonderful time for many who engaged.

One mother I spoke to said she really wanted to sit quietly in church today without her kids but admitted that she really enjoyed the environment that was created which allowed her to spend time with God and her children.

One other mother with 3 under the age of 3 said…"normally my husband is in the creche with one of our children, I am in the “cry room” with the other, but today we were able to REALLY be here, all in together. It was a nice change.

An older man said he …“walked in, saw the tables set up and thought … ‘oh no’ … but afterwards he made the effort to come up to me and say he really engaged in the morning and loved the opportunity. I was truly touched. 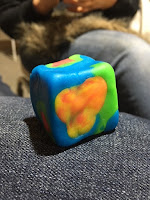 I met an older lady who shared how God showed her what intergenerational really looked like when I asked everyone to share their play dough and mould it all together, experiencing how we are transformed by being together into something different than when we started.  She moulded it in a different way and it demonstrated that we can be still be “all together but with our personalities intact.” It was a beautiful way to see the body of Christ.  She went on to share with me about the recent loss of her mother and the sadness of that. We got to share about the desire she has to share with other woman of all ages and how this would be very healing for her and others. 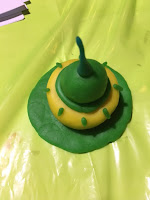 Another family was making their own things from play dough, but then they started to join it together and made something they couldn't have done apart. It was quite unique and intriguing.

And they were only the stories I got to hear in the short time I was there. So, the morning finished and I was spent ... talking and leading about the importance of lifelong discipleship being much more than a program or a service, but doing life together. For me, I had served for the day and was keen to go home and simply relax. For me it was a big positive, tick, done ... and then someone asked us to lunch with two other families.  I have to be honest, my first thought was “do I have to go to lunch?” Then the second thought was … “if we do, we will just go for a little while. I am tired and I really don't want to put the effort into making new friends.”  I mean, I can talk about doing life with people in a morning orchestrated experience, but really, do I have to have lunch with them?

God never misses a moment to teach us and remind us about what Life Together is really about. As I had said that morning, “we only need to have eyes to see and be willing to open the eyes of our heart that we might see Jesus.”  (Ephesians 1:18 )

So 3pm comes along and we are still deep in conversation, sharing life, passions, struggles and shared frustrations. Two wonderful families with young children sharing about the juggle of life, ministry and parenthood. My teenager was a part of the conversation and loved the heart connection with the young mums, kids playing in the rain in their undies, the men sharing the challenges of work and life, good food and wonderful conversations all around the lunch table together.  So, it begs the questions … where did true community happen for me today?  I want to say it was everywhere, both in the morning celebration and at lunch, because God was in them all and He never misses a moment. But for me, deep down where it matters most, it happened around the lunch table, as we shared, listened and truly made friendships that I believe God put together that day for so much more than the moment. I am looking forward to what He is doing and will do through that time and thank God that I had the eyes to see and the open heart (even if I did go kicking and screaming on the inside) to see the God connections and to be willing to do life with others.

Many people ask me, in this busy life of today, how we could possibly do life together. It is just so counter-cultural. Family life is hectic. They can’t even come to Church once a week, let alone ask them to interact together across the ages. Many ask, “What does life together really look like?”