We live in a Materialistic society and a culture of abundance where the power of Jesus’s parables can get “lost in Translation” for us all, but especially our kids. Consider the parables of the lost coin, the lost sheep and the lost Son (Luke 15) 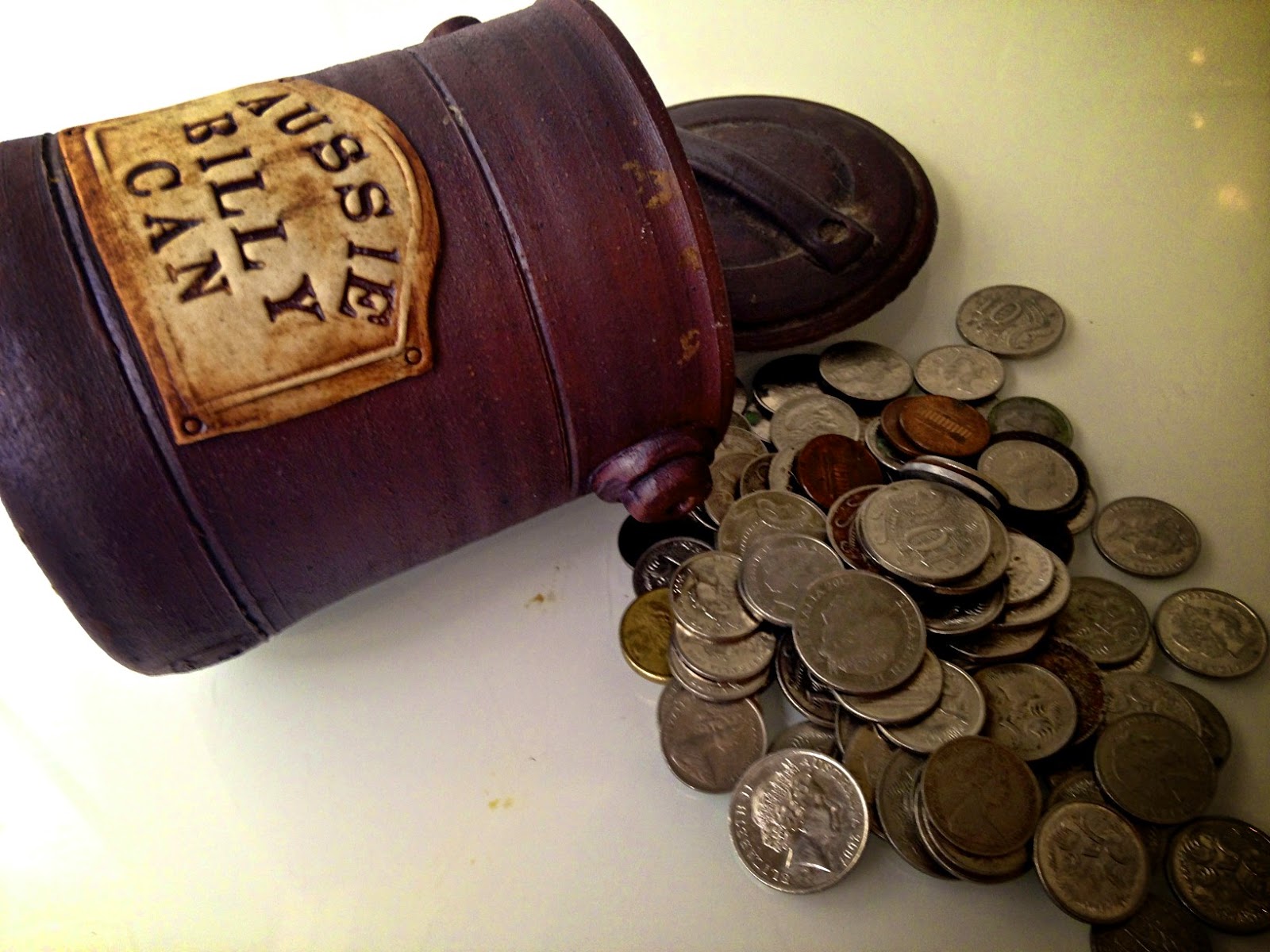 Suppose my child has ten silver coins and loses a coin, he would think “OH well, I have plenty more, who cares!”
Suppose I have 100 different assets in my house and a robber came in a stole one thing!  While I would be annoyed, I would be happy that he didn’t take more and the insurance will cover the one thing, if I could even be bothered to make a claim for such a small thing. After all, I still have 99 left. I will simply replace it with something else, even though I don’t really need to.
Let’s be honest, possessions are expendable, even people are sometimes expendable. If something is lost we simply replace it. For many if something is broken and yet fixable, we would often rather buy the newer model anyway. Sadly, we don’t even usually wait till it is broken to upgrade.
As I was trying to work through how I tell these parables to my children, to tell of the depth of the Lord’s love for us, the lengths that He will go to, I find it can get “lost in translation”. So many kids around me couldn’t be bothered searching for a silver coin. It has no value for them. They just ask Mum and she gives them another.
I was speaking to an adult recently, who couldn’t understand why the Creator would even create people who have the capacity to get lost. He even said that it is the Creator’s fault to have created such faulty people. So in this context to explain the depth of His love, that He would sacrifice the 99 to go find the 1 gets lost on such a mindset! God’s sacrificial love was not the concern for this man. He actually questioned if the Creator knew what He was doing from the start.
When Jesus was telling these two parables in particular, he sat amongst Pharisees who didn’t think much of him at all. At this time they questioned whether he knew what he was doing. To them Jesus was clearly doing it wrong, as at the time of telling this parable he was eating with sinners and this was not the best way to win votes of popularity with them especially.
It is hard times today, when the message of God’s love has to break through an abundance of possessions and the ability to create our own destinies and dreams. Quite frankly, so many just don’t see the need for God at all. This is true for all ages.
Then we come to the third story, as Jesus often talks in trilogies. By the third story the message starts to hit home a little more. When the son is left with nothing and is truly lost, he has nowhere to go. Then the grace and love that is bestowed on him starts to strike a cord today with people.
Of course, my adult friend would say it was foolish of the father to even give him the money in the first place, what was he thinking! I believe that was Jesus’s point in the story as He was speaking to the Pharisees and likening them to the older brother who was very angry about the whole situation. The love of the father is the love God desires to give to us, even though He knows we will squander it and waste it. It is only when we have lost everything and really messed up that we can appreciate the depths of the Father’s grace and love. For so many in Western society we have what we need and we have it in abundance.  We tend to take it for granted and somewhat expect it, as if we are somehow owed it in the first place. This is a common attitude I see in our children today.
While we are expecting the world, while we are able to replace whatever we have lost, while we see possessions and life as expendable, God’s message has never changed. What once was lost is now found and it is all that matters to Him, that the son has come home, that the lost sheep is found and that the coin is discovered again. Surely, we don’t ALL have to wait till we have nothing and are completely lost to discover His love. Or do we!
I pray that God’s message of LOVE doesn’t get “Lost in Translation.” Let’s translate it so our children and people can come to know how wide, how deep, how high the Father’s love is for everyone.
Posted by Tammy Tolman at 19:04 No comments:

We need to look UP more often

I looked UP from my fast pace today to see a box that said..

"Just 5 cents can give a child clean water for 2 days"  from UNICEF. 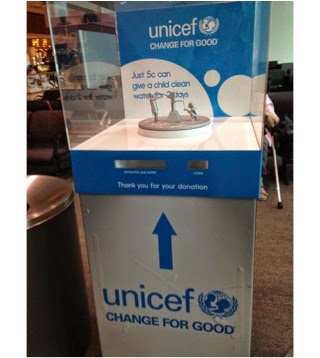 100s of people walk (rush) past this box each day. Who notices, who cares ? How can this be ? How many look UP or OUT of their world to see? How did we get to this stage where things are so out of proportion that it is not even noticed as we walk past in a rush to deal with todays "first world" problems?

Will I have to wait in a long line to get my coffee?
Will the traffic be so bad that I can't get to my lunch appointment in time?
I am so hungry because I skipped breakfast as I slept in, in my comfortable lush bed.
The wifi is not working so I can't check to see how many "likes" I got on the photo I posted yesterday.

Lord help me, why can't I keep my chin UP and be happy with my blessed life, when sometimes my day is bad because .......
......my kids can't work together and do some odd jobs around the House.
......because I can't pay off my debt as quick as I would like from a wonderful holiday we just had as a family.
......because the power is flickering in the house which is cutting into my work time and what I can achieve during the day.
..... because I can't scratch everything off my daily list.
......because my son wants to borrow the car because he has no petrol in his own car because he has spent all his money on slushies at Hungary Jacks.
......because I can't lose weight that I want to because I have to drink 8 glasses of water a day to help this process and I HATE drinking water because it tastes boring.

Lord help me get perspective when all a child somewhere in the world needs is 5 cents because they would like to have a drink of CLEAN water......for them it doesn't taste boring....it is life giving.

"Rejoice in The Lord always and again I say rejoice" I used to sing as a child. (Phil 4:4)

Lord help me to look UP to you. To always keep your perspective on what's important, what is possible and what you call us to do.

Lord help me to say thankyou more often, to ask how I can be a part of the change, so that one day there will not be some of us who have more than we need at the expense of others. I pray for the day where everyone will have what they need.

Our father who is in heaven, thankyou for who you are.
Give everyone this day their daily bread and water.
Forgive us when we have forgotten our part to play in this world and help us to forgive each other as we have lost focus on what is important in a world of wanting it all for ourselves.
Lead us not into self-centred desires that can harm or disadvantage others through our own selfishness.
For in your kingdom everyone has what they need, no one goes hungry or thirsty. May your kingdom come here on earth as it is in heaven.

We need to look UP more, UP toward you so that we live daily from your perspective, and look UP at the world around us to see how we can be a part of the change.........for some of us it only will cost 5 cents.

Posted by Tammy Tolman at 14:35 No comments:

Who are you LOYAL to?


I was looking around my kitchen the other day and was surprised to notice for the very first time that all the appliances we had in the kitchen were from different suppliers. In fact the more I looked I was shocked there was not one that seemed to be the same.
We had a “Kambrook” Toaster, “Fisher and Pykel” Fridge, SMEG dishwasher, “Westinghouse” Oven, “Russel and Hobbs” Jug, “Breville” Urn, “Sunbeam” Electric Frypan and a “CannonSP6” Stovetop.

I didn’t even know there was that many different companies that made kitchen appliances.  It started to become a challenge for me, so I looked around the rest of the house. It got worse…..

Seriously, I thought to myself, could we be anymore diverse! Not one thing was the same…OBVIOULSY we are not “Brand LOYAL”. This is not good news for these companies; they obviously have not been successful in selling to us, their value. We simply go for the one that is the cheapest, most assessable and possibly even what looks the nicest on the outside at the time of purchase. Sounds very fickle I know.

While I am fine with this personally, as appliances are clearly not our passion, but it made me think about what AM I loyal to?  Is LOYALTY seen as important today? In a world where everything is easily replaceable and expendable, does LOYALTY have a place?

The article said “With today’s savvy consumer, it’s imperative that brands focus on how to better interact with them, how to build stronger relationships, and how to ensure that those relationships generate trust and meaningful engagement over time.”

Wow, so companies are talking about relationships, trust and meaningful engagement as being important keys to keeping their customers as they struggle with maintaining their customer base. Excuse the cynic in me, as I look around and see the breakdown of “loyalty” in the area of marriage, friendships, the Church you belong to, the country you live in, the sporting club you support etc. These are surely the places where relationships, trust and meaningful engagement are “key”. There are people jumping from ship to ship in every aspect of life.  This happens when things are not working for them, or when something looks more attractive or is cheaper to obtain. In a world with so many options it is just too easy to NOT BE LOYAL.

The word Loyalty is closely linked to being someone who is FAITHFUL and someone that is TRUSTWORTHY. These are important qualities that God looks for as He asks us to put Him first, to be LOYAL to Him first above everything.

God’s loyalty towards us has never changed; it knows no limits and no bounds, no matter how much we have dumped him, been disloyal or unfaithful.

“For God so loved the world that he gave his one and only Son, that whoever believes in him shall not perish but have eternal life.”
John 3:16

They are big words, big challenges, in a world where LOYALITY is losing ground in every aspect of life….it begs the question!

SO what/who are you LOYAL to? What will you hold onto and stay with even when the grass looks greener on the other side? What would you sacrifice something for  even if it may require dying for? Is there anything?

Posted by Tammy Tolman at 23:46 No comments: